Tools That Change the Way We Think

Finished my paper. Spell Check. Grammar Check. This was probably the first thing most of us remember using that changes how we were actually going to say something. I never realized that it wasn't me who was writing , but now somebody else putting words into my mouth. Search engines like Google and Yahoo! both demonstrate changing our way of thinking because I never asked them to search for me, don't get me wrong I like that sometimes I can't remember something my friend told me to look up and boom, it's there because I only typed in half of what I was saying.

Another thing that constantly changes what I mean to say is autocorrect, we've all had that incident where you mean to say something and you wind up sending your mom or dad a really awkward text message and have to explain tho them how autocorrect ruined your pure message. For instance: 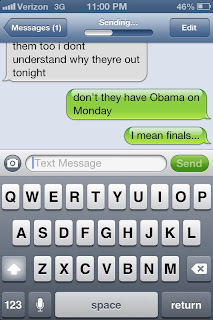 Lets be honest, this is probably similar to something that has happened to you before. This isn't mine personally, but I can completely relate to this in the sense of crap I don't why I wrote Obama instead of finals, what the heck autocorrect. This can be entirely embarrassing because autocorrect sucks sometimes.