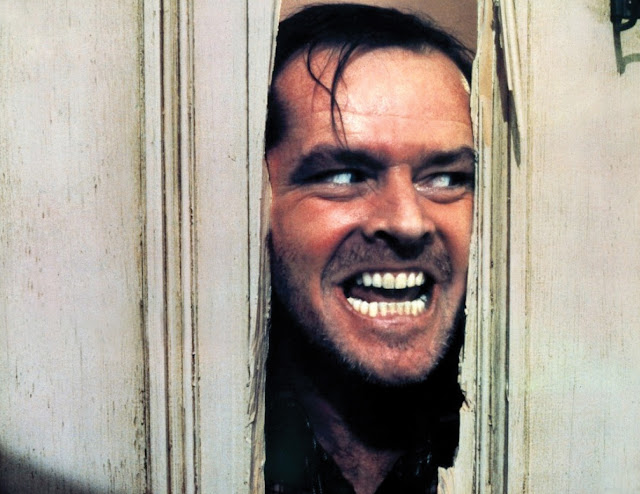 CHARACTERIZATION
1. Describe two examples of direct characterization and two examples of indirect characterization. Why does the author use both approaches, and to what end (i.e., what is your lasting impression of the character as a result)?
Direct characterization used in The Shining would be when Jack Torrance described how Mr. Ullman looked by saying how he acted and the way he looked and another example would be when Mr. Hallorann was being described as black. An example of indirect characterization would be in the beginning of the novel, I could completely tell that Jack was kind of an ass and this line was my favorite: Pg. 8 "... and Jack flashed the PR smile again, large and insultingly toothy." Another example of indirect characterization would be how Danny is basically daddy's little boy, in the sense where he always wants to please his dad because in a certain chapter he struggles with his reading because he's just learning and will push himself until he figures it out. I think he uses both approaches because it's important to paint a picture for a reader by using direct characterization, but the fun part about books is also adding the small details through imagination which comes through indirect characterization.
2. Does the author's syntax and/or diction change when s/he focuses on character?  How?  Example(s)?
Yes, for each character it changes completely. Each character has their own voice and you can tell when the story is about a certain character as if they are telling the story as I said in question 3 of the general question.
3. Is the protagonist static or dynamic?  Flat or round?  Explain.
The protagonist would probably be Danny, so in this case I would say that he is a dynamic character because he goes through this traumatic experience of his father basically bashing his face in and tries to empower through it. He would also be a round character because Danny significantly changes (if you can at the age of six) into a brave, young man who overcomes the scariest thing that will probably happen in his life.
4. After reading the book did you come away feeling like you'd met a person or read a character?  Analyze one textual example that illustrates your reaction.
I know each character as if they were my best friend because the in-depth characterization Stephen King went through to characterize the people in the story was perfect. For example, in the chapter titled "Tony," Danny realizes that he is Tony later on in life and has his own climactic experience in his life to see that he becomes someone and has the chance to make something of himself. Throughout this chapter Danny has many epiphanies about life and the choices he has to make in order to make it out alive while trying to save everyone else at the same time. It would be great to meet Danny and see how his life is at this age (as in probably 46 or something around that number).
Posted by Unknown at 9:58 PM